April 12, 2018
This is Kirby's version of "Of Mice And Men". Except Kirby's Lenny is more like the real Lenny would be: no friend to look after him, and he lashes out more savagely. And it is his own (not George's) best laid plans (of mice and men) that give him hope, and ultimately come to nothing. Note the symbolism of magnetism: Hunk could not attract anyone to him, he was always alone.

This is a thought provoking tale that stays with you. Because it is two opposite stories in one. The first is troubling, the second heart breaking.

On the surface it's a story of goodness and decency. Hunk wants to help a random stranger. And although he is taken advantage of, the authorities are decent and good, showing that the mass of men are also decent and good. Not only do they understand and forgive his problem (it was not his fault really), but they give him the greatest gift a man could ever have: a rocket to the stars, that will let him try planet after planet until he finds one that fits.

As someone who is mildly on the autism spectrum, the idea of being able to choose a new planet is especially meaningful to me. The main Aspergers message board is called "wrong planet", because that is how it feels to be different: that you are on the wrong planet and you long for a different one. That space craft is a priceless investment and they do it all for one man.

This is poignant because of the feeling we have (or should have) for Hunk: how lonely he must be. And because we know that in real life people are not so generous: the story is a challenge for us to be better people!

The deeper story is altogether more sinister. The first rocket was at the same state as real life technology at the time: it was testing the ability to leave the atmosphere. And it was extremely dangerous, yet they were happy to send a man who was too depressed to care.

Yet somehow, at the same time they had a second rocket that was so incredibly advanced that it could not just reach stars many light years away, but automatically navigate to different planets, landing and taking off multiple times? That makes to sense at all. It is infinitely more likely that this was all a trick. They are sending Hunk to his death. More alone than any man has ever been, further and further from home into the endless void.

It is possible that Kirby originally made this clear, or at least ambiguous: Lee would certainly have made it more child friendly. Or possibly Kirby had the authorities making those promises, but I bet his own dialog would have been more nuanced, allowing either interpretation.

By this second reading the whole tale is a tragedy. Hunk was rejected and mocked his whole life, used and betrayed. Even the very first man, the one who knew about him only saw him as a local odd character. Hunk wanted to do good, but could take it no longer and lashed out. Who can blame him? But the reality is that it did him no good. He never had any friends and would die alone.

It goes almost without saying that this is full of parallels to Marvel superheroes.  It was cover dated May 1961, 6 months before Fantastic Four 1, and contains a similar origin (also seen in Kirby's Challengers of the Unknown 3): test pilot goes into space in first rocket to leave the atmosphere, he is hit by mysterious rays, and gains a strange power. The name Magneto and the power would be used again two years later in the X-Men. And the name Hunk is close enough to Hulk: the big misunderstood lonely strongman.

The ending is almost identical to the ending of "To The Beckoning Stars" in Tales To Astonish 94 (August 1967, 6 years later). That one was plotted by Stan Lee and drawn and fleshed out by Marie Severin. I don't know if Lee was consciously recalling the Hunk story, but as usual everything in that issue (the Hulk, the New Men, etc.) can be traced back to Kirby. Here is the ending in the British reprint: 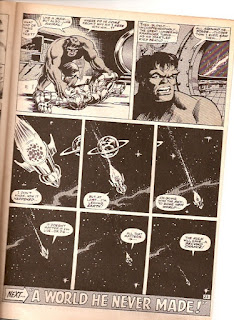